Read why we think you should work with the UK public sector.

The UK government works hard to encourage more SMEs to work and bid in the public sector. One of the main requirements put in place by the government is that all public sector supply chains need to be paid within 30 days of submitting an invoice.

This ensures that SMEs are being paid promptly for work done – resulting in a healthy cash flow.

The UK government is working towards a target that £1 in every £3 government spend will be with small businesses by 2020.  This target includes the Crown Commercial Service and each government department, and includes both spend through the supply chain and direct procurement spend.

Progress is already being made in some industry sectors as £1.39 in every £3 spent through the government’s Digital Marketplace is going to small and medium-sized enterprises. This has given the UK’s technology SME sector a major boost.

Last year’s ‘Exporting to the UK?’ report by Enterprise Ireland reveals seven key areas of opportunity for Irish companies looking to do business with the UK public sector.

These seven areas offer opportunities for businesses of all sizes, whether as direct contractors or as part of the supply chain.

Work with the UK public sector

Are you ready to branch out and explore the procurement possibilities available with the UK public sector? Each year the UK public sector spends £242 billion. If you would like to get started and find tender opportunities in the UK, start by subscribing to Supply2Gov’s “Touching the Sky” package. Users never miss relevant public sector contracts in the UK and they gain access to private sector opportunities as well – an excellent way to get a foothold in the UK market.

At the end of 2018 the Irish Government launched a new trial programme to assess buses based on green criteria. Shane Ross, the Irish Minister for Transport, aims to purchase eco-friendly public transport vehicles in 2019, as well as outlawing the purchase of diesel busses for public transport. Read our infographic below to find out more about this programme and what public sector procurement opportunities are available.

If you would like to bid for and win more environmental tenders, Supply2Gov can help businesses access fresh opportunities every day.

Powered by Ireland’s largest database of public sector contracts, we’ve made it as easy as possible for you to find relevant opportunities in Ireland as well as in the UK.

We have a range of payment options. Supply2Gov is designed for growing businesses, which is why users can choose to pay each month, every six months or annually.

If you are not a Supply2Gov user but would like to try our service for free, register now for our ‘Ready to Take Flight’ subscription and gain access to tender opportunities in the area of your choice.

The temperature isn’t the only thing that’s going up this summer. We’ve identified the hot spots for public sector contracts across Ireland and the United Kingdom.

With more opportunities in the public sector out there than every before, it’s time to think about the contracts that you have been missing.

Here’s our list of the top public sector procurement hot spots below, so you can spot the opportunities that could be sitting on your doorstep, and beyond. 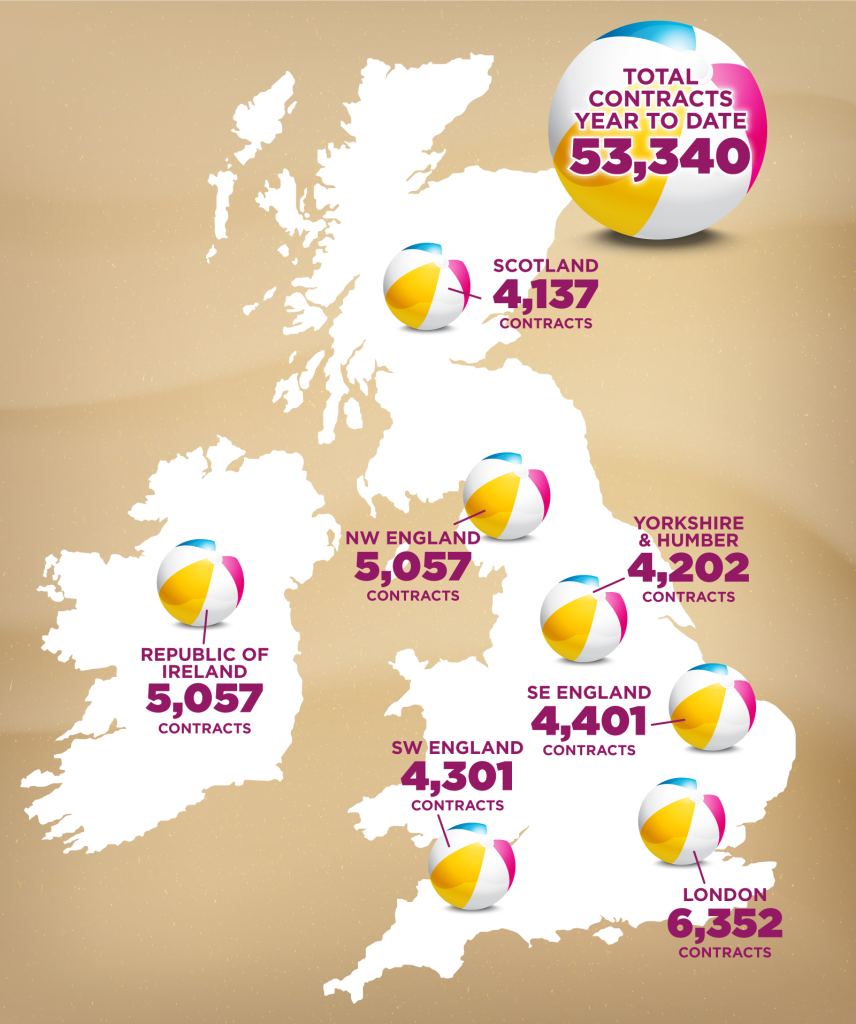 Ireland spends approximately €12 billion every year on goods, services and works. Procurement is one of the main focuses of the Irish Government’s Public Service Reform programme and in the latest Communications Strategy (2018-2020) from the Office of Government Procurement, the department states that it aims to “promote participation in the public procurement process by SMEs and micro enterprises.”

London continues to sit at the top of the hotpots – and how could it not? London had the highest public spend figure per head across all English regions in 2017 at £10,192 (11% higher than the UK average). The new HS2 rail link from London to the West Midlands and the North is estimated to cost £55.7bn – a key opportunity for infrastructure suppliers.

UK central government intends to spend £134bn over the period 2016-21; 32% of that sum will be spent in the North of England. The Northern Powerhouse initiative investment will use this spend to support projects around road, rail, freight, aerospace and skills development.

The new HS4Air rail line will connect Kent with major airports in under an hour. The project is valued at £10bn and has been described as the “M25 for high-speed trains”. This year it was also announced that a further £2m will be given to local regions in the South East to create transport strategies to improve connectivity and drive economic growth.

A Ministry of Defence report released in July 2018 states that the defence sector brings an annual investment of £5.1bn to the South West of England. Most of the MOD’s expenditure in the region centres on technical, financial and other business services.

Supply2Gov subscribers can access tender alerts for the areas above and more! Once you have signed up for your FREE local area, simply tailor your profile to the services or products that your SME business offers.